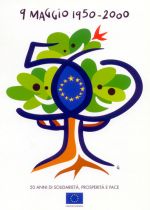 On 9th May, 1950 Robert Schuman presented a proposal to create an organized Europe, which was necessary for the
maintenance of peaceful relations between the States that composed it.
The proposal, known as the "Schuman declaration", is considered the official birth document of the European Union.
Learn more about the Europe Day.

In order to celebrate this relevant date, all European centers of the Europe Direct network organize every year many
initiatives and events for citizens in all European countries.

The Europe Direct in Venice has organized the following events: