History of the Europe Day- 9th, May

The Europe Day on 9th May has become a European symbol that, together with the flag, the anthem, the motto and the one currency (the euro), identifies the political entity of the European Union. The Europe Day is the occasion to give life to festivities and to organize activities that bring Europe closer to its citizens and to people among them.

Thus, on 9th May, 1950 the European Community was born, right when the threat of a third world war distressed Europe again. 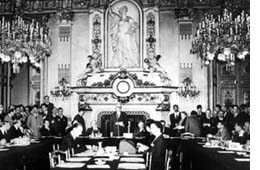 On that day in Paris, the press was convocated at six o'clock in the afternoon at the Quai d'Orsay, home of the Ministry of Foreign Affairs, for an extremely important communication. The first lines of the declaration of 9 May 1950 written by Robert Schuman, French Minister of Foreign Affairs, in collaboration with his friend and adviser, Jean Monnet, gives an idea of ​​the ambitious purpose it.
"World peace could not be safeguarded without creative initiatives commensurate with the dangers that threaten us". "By putting in common some basic productions and establishing a new High Authority whose decisions will be binding for France, Germany and the countries that will join it, the first concrete foundations of a European federation indispensable for safeguarding peace will be realized".

Therefore, it was offered to create a supranational European Institution to entrust the management of raw materials that at the time were the prerequisite of any military power, coal and steel. The countries are called to renounce with these modalities to the national sovereignty over the situation of war that had just finished, a conflict that had sown innumerable damages, physical but above all moral, hate, rancor, prejudice. To understand the revolutionary impact of the gesture it would be enough to imagine today a similar initiative between Israel and the Palestinians, between the Serbs and the Bosnians, between Tutsi and Hutu populations; and at the time the level of magnitude was much greater and the wounds deeper!
At the European summit held in Milan in 1985, the Heads of State and Government decided to celebrate this date as Europe Day.