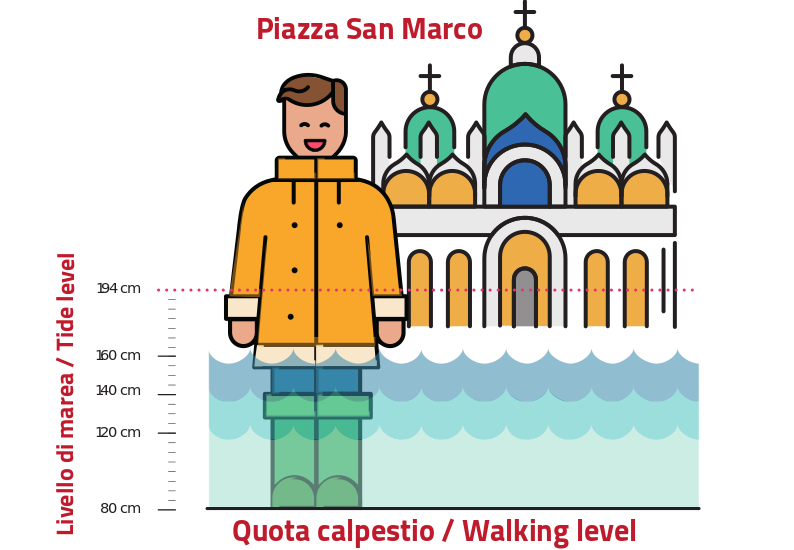 The acqua alta, as the seasonal flooding is known, is a natural phenomenon, which has always been a feature of Venetian life.

Usually, tidal events have a very short duration. For example, when the high tide reaches a maximum value of 120 centimetres, it lasts an average of less than an hour and a half.

Even when there is high water, you can still move around the city walking on designated pedestrian routes - partly consisting in temporary elevated platforms - which can be used up to when the height of the tide reaches 120 centimetres.

During high tides, public water transport services work according to schedule, except in the event of very exceptional tides, although some routes may be modified when the height of the tide reaches 95 centimetres.

Flood information is provided in real time via the web and smartphones. To get information about the tidal levels in Venice, see the daily forecasts of the city’s tide monitoring and forecast centre.

The tide values are indicated in centimetres and have as reference (zero) a conventional level established in 1897. Since the walkable ground of Venice doesn’t unfold on a homogeneous plane, the same tidal event occurs in different points of the city in a variable way, depending on the height of the urban pavement.

For example, in Piazza San Marco, one of the lowest areas of Venice, high water becomes perceptible when the height of the tide is greater than 82 centimetres. If the tide level rises up to 105 centimetres, the area of the Rialto Bridge also begins to flood; while in the square in front of the railway station, 135 centimetres of tide are needed for the water to touch the walking level. Other areas of the city are even higher.

Conventionally, being of low frequency, events with a tide level above 140 centimetres are considered exceptional. 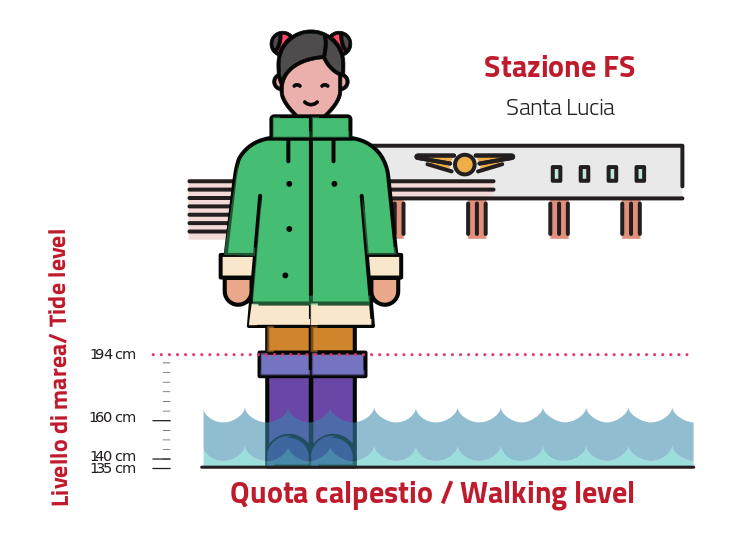 The City of Venice has made six short informative videos to explain to visitors the phenomenon of high water and its impact on the city, in a clear and accessible way to all.
The initiative is part of the European Tourism-friendly Cities (TFC) project, funded by the URBACT program, which aims to suggest solutions to support the development of sustainable tourism