Explaining the European Union and its institutions to citizens, and in particular to young people, is often a difficult task. Therefore there is the need for a strategy that aims at the realization of a European dimension in terms of values ​​and knowledge as a continuous process of interaction, based on respect for pluralism and the diversity which are the heritage and wealth of peoples around Europe.

The educational offer "Traveling Europe" designed and implemented by the Europe Direct service since 2007 for middle schools, is divided into 2 phases:
- Presentation and guide of the "Traveling Europe" game, in which children travel virtually around the European Union and experimenting it by making questions about culture, history, geography and sport of the various member states. In gym or lecture hall.
- Meeting in the classroom in which a moment of thought about the process of European unification is suggested, concerning also the European Union's motto "United in diversity" and the institutions and symbols of the Union.

"Traveling Europe" is a team game for middle schools which consists of a quiz about the cultures of the member states and which takes the form of a large foam-puzzle carpet representing the 28 countries of the Union European, on which students move. The game "Traveling Europe" represents a virtual journey through the countries of the European Union to understand the deeper values ​​that unite people around Europe and which constitute the basic element for the formation of a "European citizen" awareness, favoring in this way the process of integration.
The aim of the teaching proposal is to understand the other European nations with their cultural identities, to discover the customs and habits of different European people, to deepen the meaning of the concepts of social integration and European citizenship.

The preferential targets are the II and III classes of secondary schools of first degree. 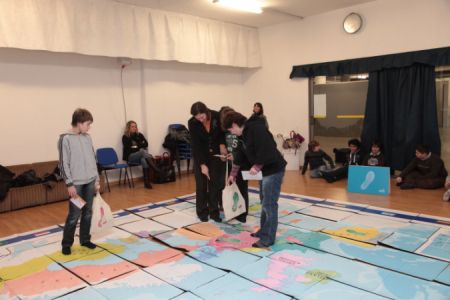