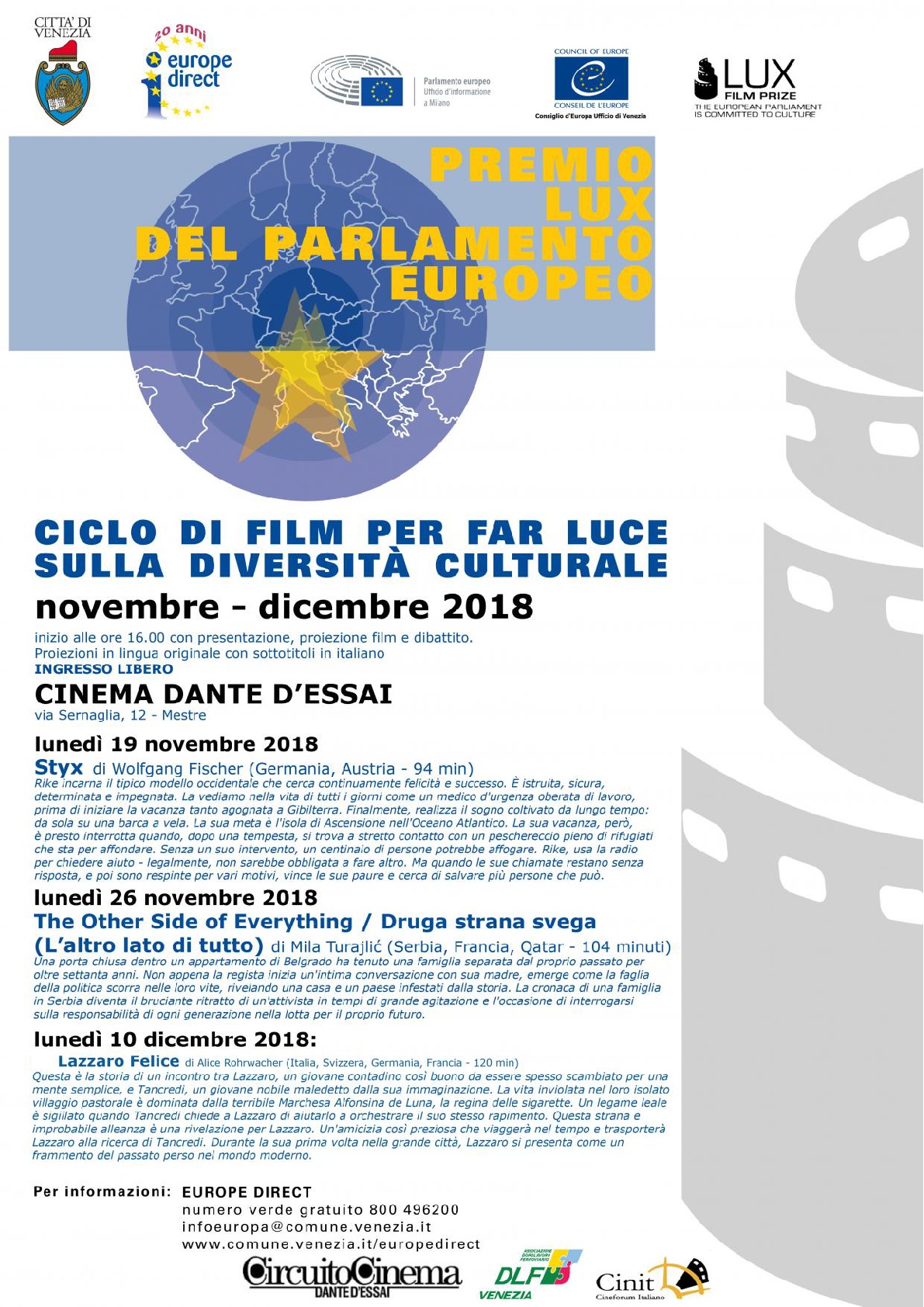 From the 19th of November to the 10th of December 2018 in Mestre at the Cinema Dante d'essai took place the cycle dedicated to the three finalist films of the 2018 Lux Prize of the European Parliament, organized by Europe Direct of Venice in collaboration with the European Parliament - Information Office in Milan, the Council of Europe - Venice Office, CINIT Cineforum Italiano, the Dopolavoro Ferroviario Association and the Venice Municipal Cinema Circuit.
The film cycle was included in the program "November Woman 2018. FREE FROM VIOLENCE". In fact, the three films dealt with three strong and active women. This aspect was pointed out by the President of the European Parliament Antonio Tajani: "In each of these films the look and the stories of these women with a leading role open us to confront with current issues: the issue of responsibility towards the migrants masterfully represented in Styx, the civil commitment to fight the populist sirens in The Other Side of Everything and, in Woman At War, the urgency to leave a liveable world to future generations ".
The three screenings were introduced by three experts from the Italian CINIT Cineforum: Alvise Mainardi (Monday 19 November), Tommaso Faoro (Monday 26 November) and Giovanni Stigliano Messuti (Monday 10 December). See the online CINIT Italian Cineforum article.
Timetable: started at 16.00, presentation, screening and debate
Place: Cinema Dante d'essai - Via Sernaglia 12, Mestre-Venice
Projections in original language with Italian subtitles.
Free entry until exhaustion. 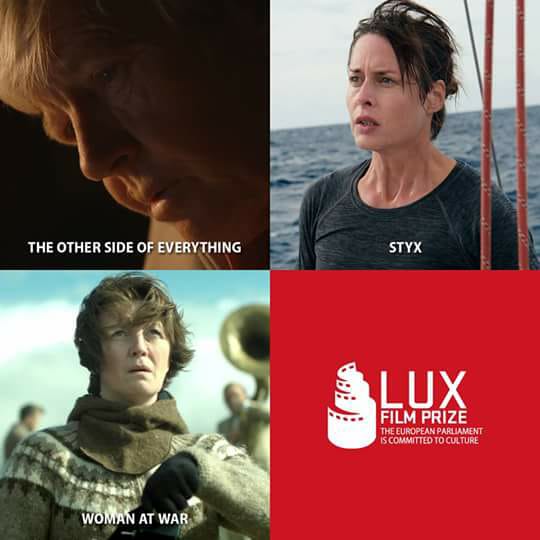 - On Monday 19 November 2018: Styx by Wolfgang Fischer (Germany, Austria) - 94 min
Rike embodies the typical Western model that continually seeks happiness and success. She is educated, confident, determined and committed. We see her in the everyday life as an emergency doctor overworked, before starting her long-awaited vacation in Gibraltar. Finally, he realizes the long-held dream: alone on a sailboat. Its destination is the Ascension Island in the Atlantic Ocean. Hier vacation, however, is soon interrupted when, after a storm, she is in close contact with a fishing boat full of refugees that is about to sink. Without her intervention, a hundred people could drown. Rike, use the radio to ask for help - legally, she would not have to do anything else. But when her calls remain unanswered, and then they are rejected for various reasons, she overcomes her fears and tries to save as many people as she can.

A door locked inside a Belgrade apartment has kept a family separate from its past for over seventy years. As soon as the director begins an intimate conversation with her mother, it emerges that the political fault runs through their lives, revealing a house and a country infested with history. The chronicle of a family in Serbia becomes the burning portrait of an activist in times of great agitation and the opportunity to question the responsibility of each generation in the struggle for their future.

This is the story of a meeting between Lazzaro, a young farmer so good that is often mistaken for a simple mind, and Tancredi, a young nobleman cursed by his imagination. The inviolated life  in their isolated pastoral village is dominated by the terrible Marchesa Alfonsina de Luna, the queen of cigarettes. A loyal bond is sealed when Tancredi asks Lazzaro to help him orchestrate his own abduction. This strange and unlikely alliance is a revelation for Lazarus. Such a precious friendship that will travel over time and will transport Lazzaro in search of Tancredi. During his first time in the big city, Lazzaro presents himself as a fragment of the lost past in the modern world.

The ten films selected for the 2018 competition were presented on Sunday, July 1, during the Karlovy Vary International Film Festival held in the Czech Republic. Original, touching, and current: here are the ten films that will compete for the LUX 2018 Film Prize: 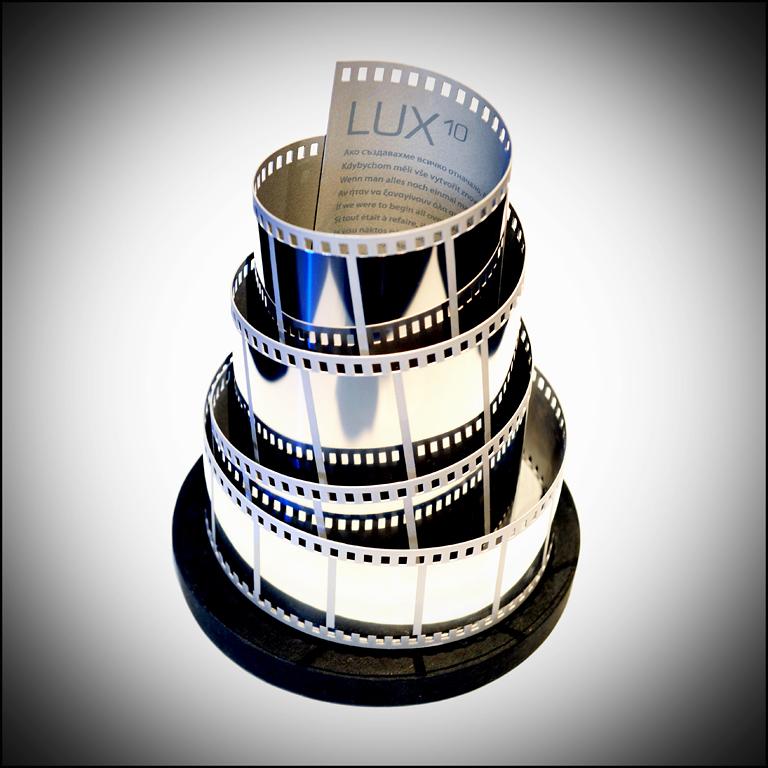 The LUX Prize is a film award given every year to a European production film by the European Parliament. It was established in 2007, fifty years after the Treaties of Rome.

At its 12th edition, the LUX Prize reflected the will of the European Parliament to support cultural and linguistic diversity, in the belief that this diversity can serve as a bridge between Europeans. The LUX Prize aspires to be an instrument to discuss about Europe, its values, its contradictions, and its future.

The objectives of the award are to spread a different light on the public debate on European integration and to facilitate the circulation of European films, overcoming the language barrier that hinders the existence of a common European film market. In this perspective, the € 87,000 awarded to the winning film is intended to subtitle it in all 24 official languages ​​of the European Union and produce a film copy for each Member State.

The logo, on which the real trophy is modeled, is a film spiral inspired by the Babel Tower, intended in a positive sense as a symbol of the richness and diversity, of the linguistic and cultural plurality of the European Union.

This year, in its 8th edition, the 28th Times Cinema project came, another beautiful result of the fruitful partnership between the LUX Prize of the European Parliament and the Venice Days.
Thanks to the fundamental collaboration with Europa Cinemas and Cineuropa, 28 young people (one from each EU Member State) film fans aged between 18 and 26 were the Jury of the Days of the Authors.
In addition, the boys were immersed in the experience of the LUX Prize and attended the projections of the 3 films of the Official Competition. This prepared them for the role of "ambassadors" of the LUX Prize in Europe and were able to promote in their respective countries the 5th edition of the LUX Film Days, the European Film Days.

After Venice, the selected films will continue their journey through Europe thanks to Lux Film Days, this year in their sixth edition. This initiative is of great importance not only for the professionals but also the for European spectators that impress today a fundamental direction to the 'movie industry. It is therefore essential that everyone can express its sensitivity to the cinema, and the awareness that Europe is rich and diversified. During the LUX Film Days, the 751 members of the European Parliament will be invited to vote for one of the three films in competition. In November 2018 the winner of the LUX Prize will be announced during the solemn session of the European Parliament in Strasbourg, in the presence of the finalist directors.

This year marked the 12th anniversary of the LUX FILM PRIZE and for the ninth time the collaboration between the LUX PRIZE of the European Parliament and the Venice Days' Giornate degli Autori, promoted by Anac and 100 authors, now in their XIV edition, which was held in Venice as part of the 74th Venice Film Festival, directed by Giorgio Gosetti, organized with the support of the General Directorate of Cinema of MiBACT and the contribution of public and private partners.

The aim of the event is to create attention to quality cinema, without restrictions of any kind, with an eye to innovation, research, expressive originality and productive independence. All features present not only in the selected films, but in special events and meetings held during the Days.

THE WINNERS OF THE PREVIOUS EDITIONS OF THE LUX PRIZE

Photos from the projection of the films: 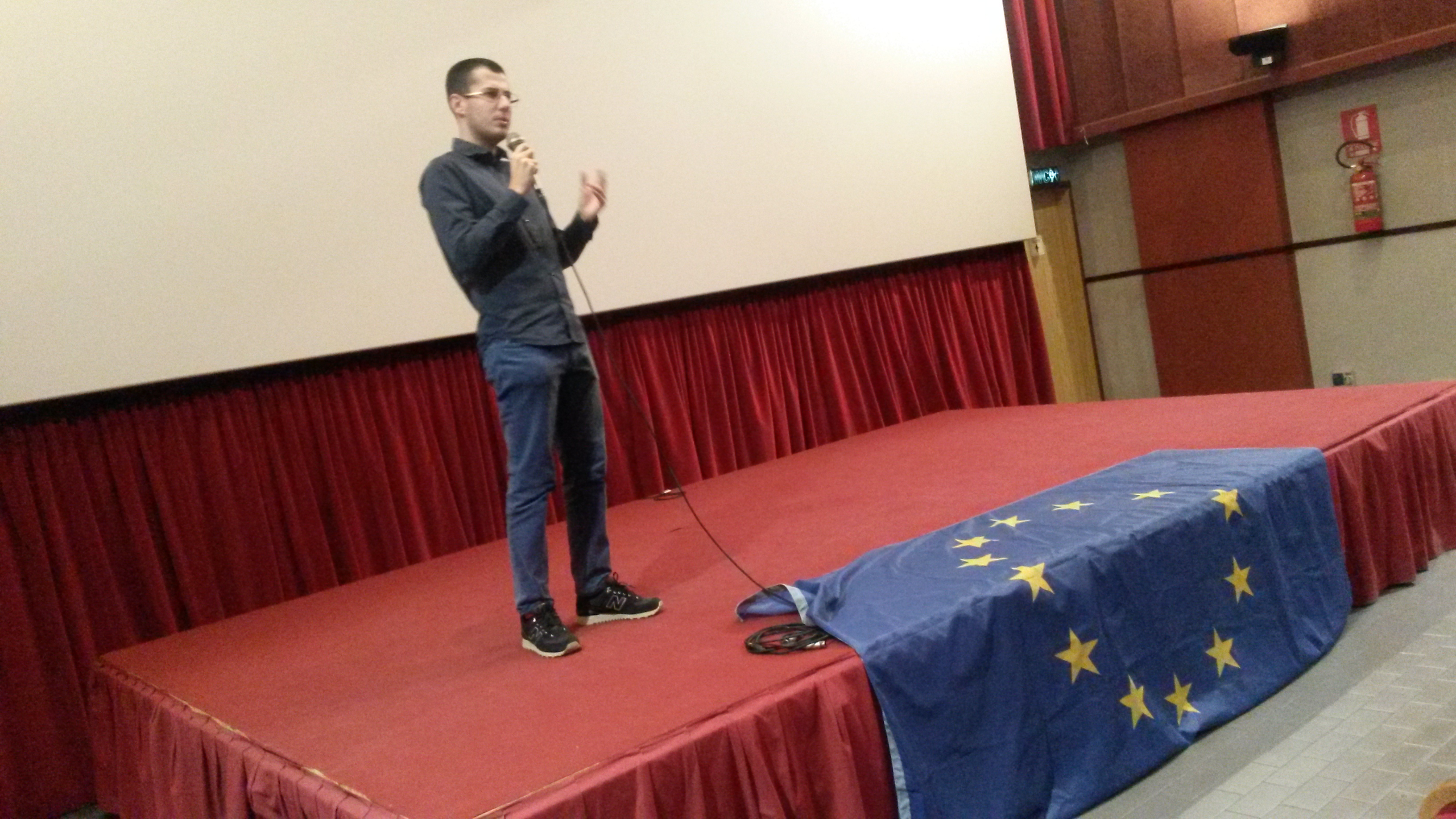 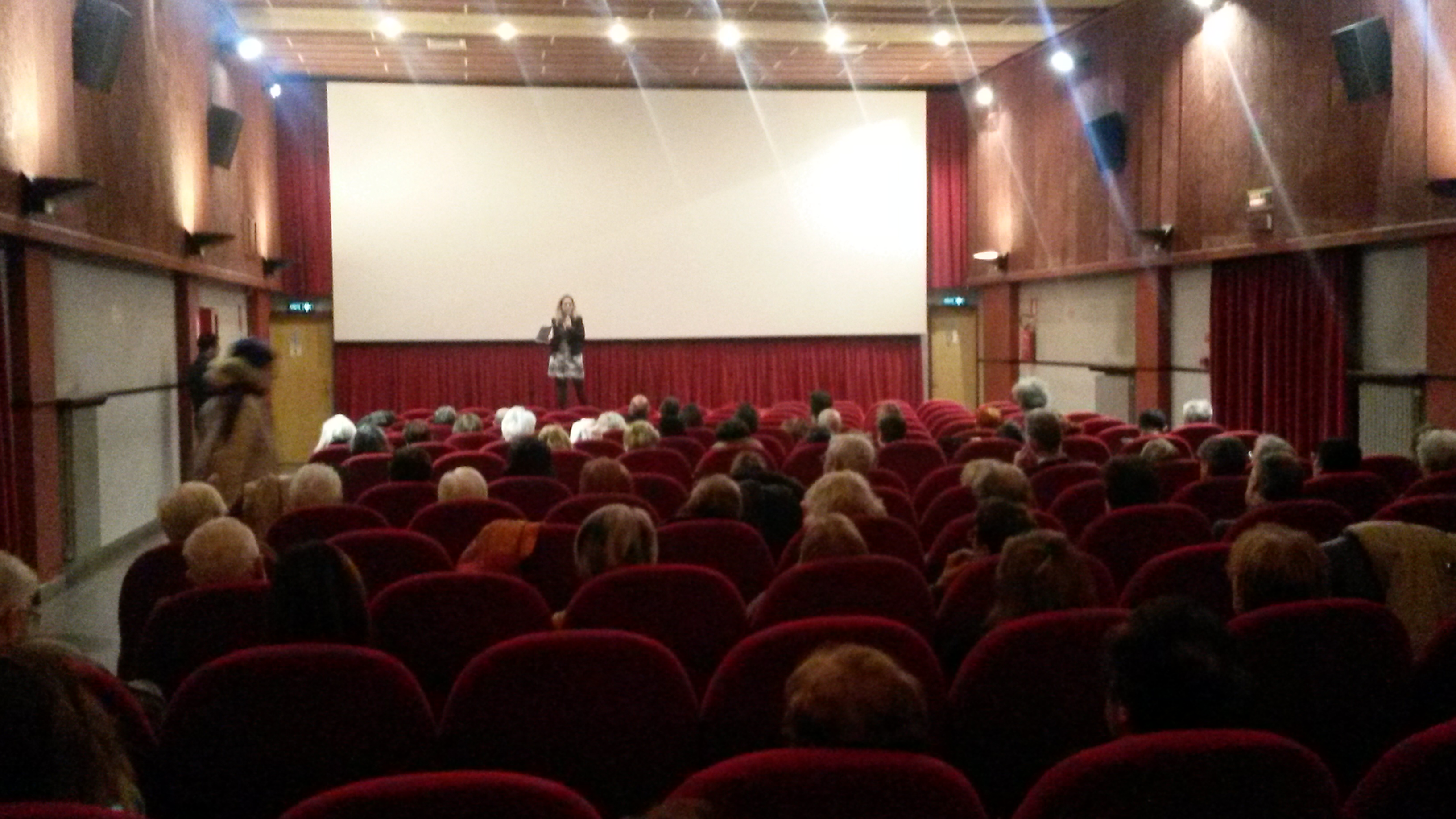 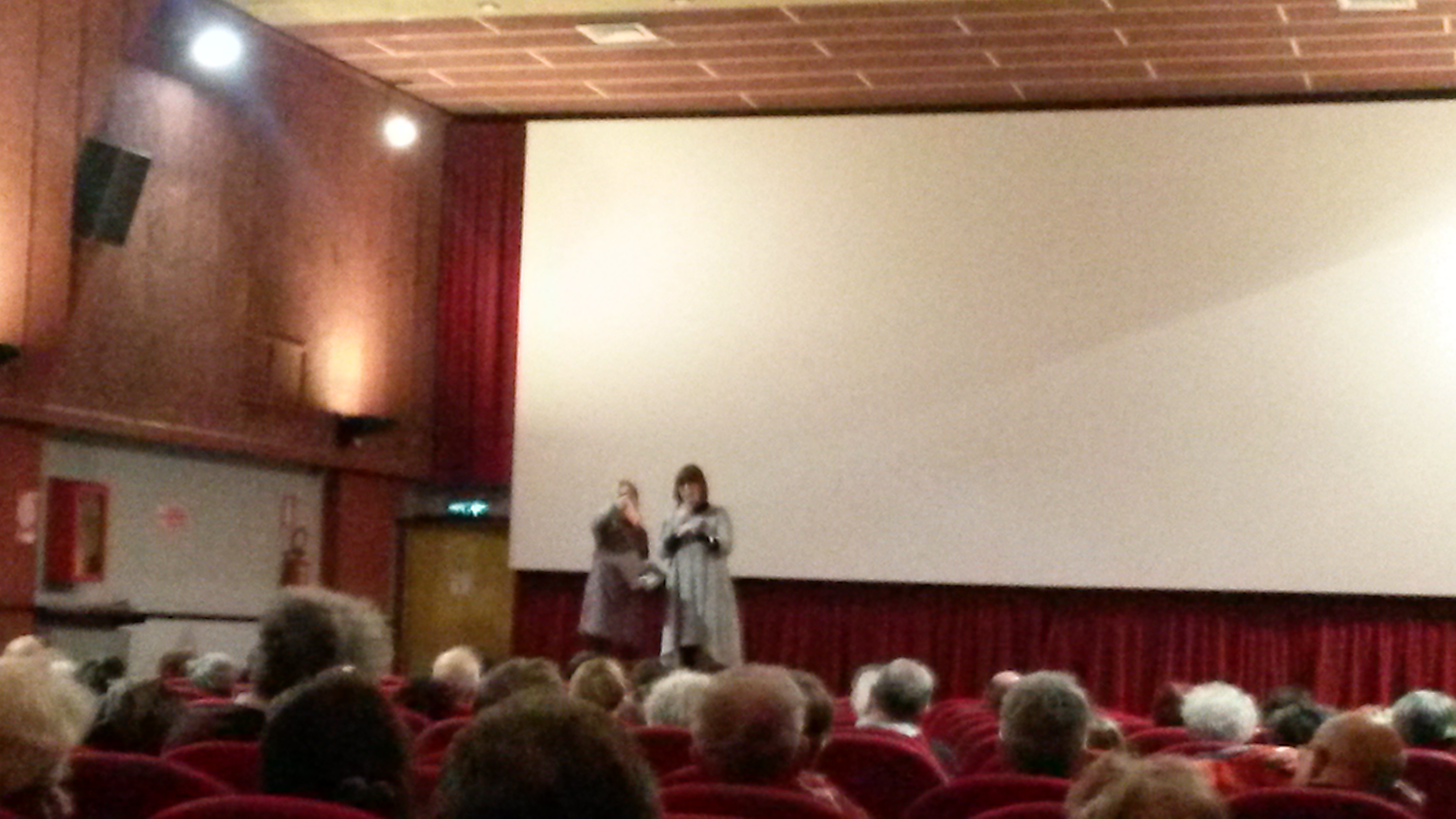 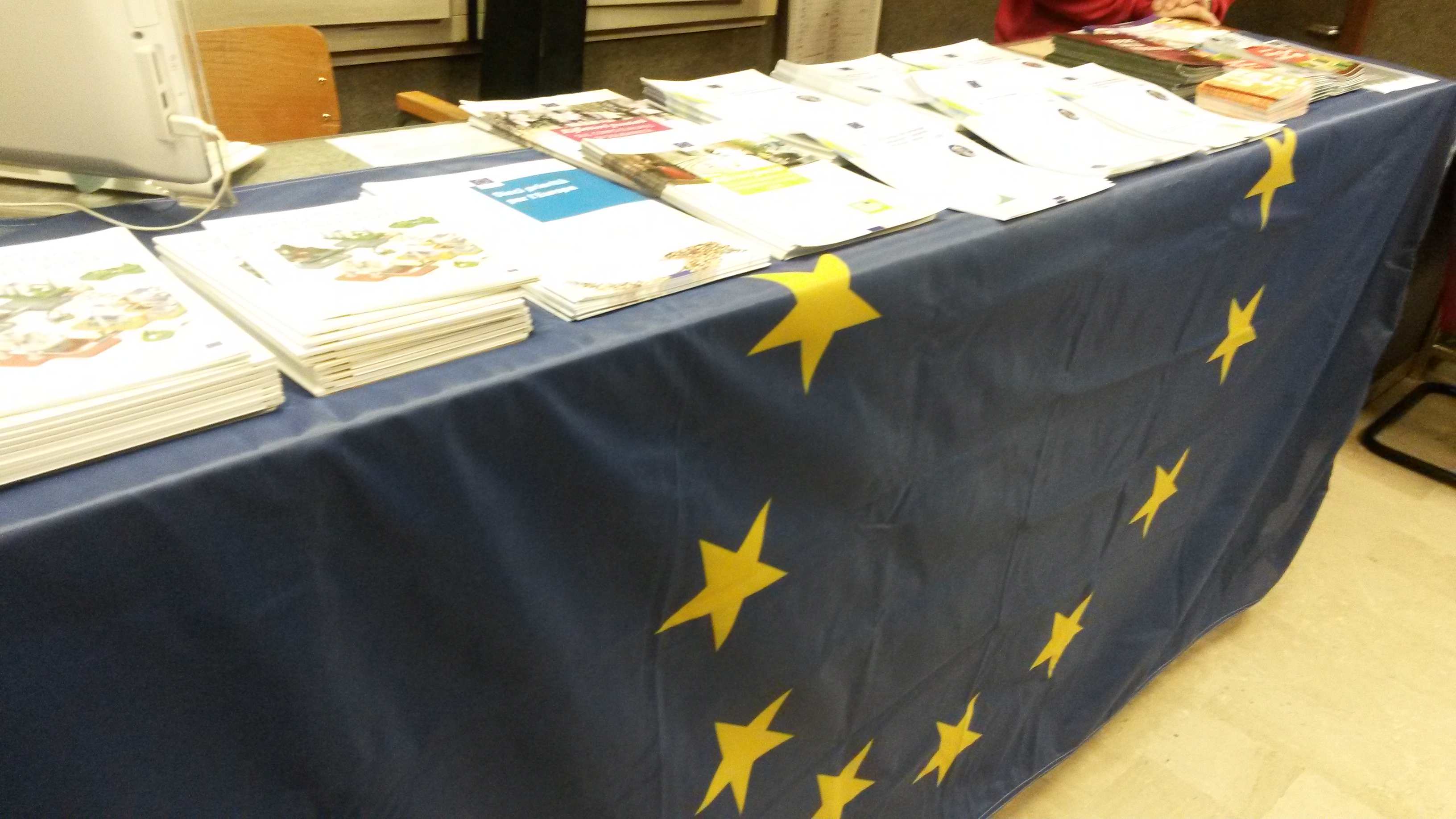 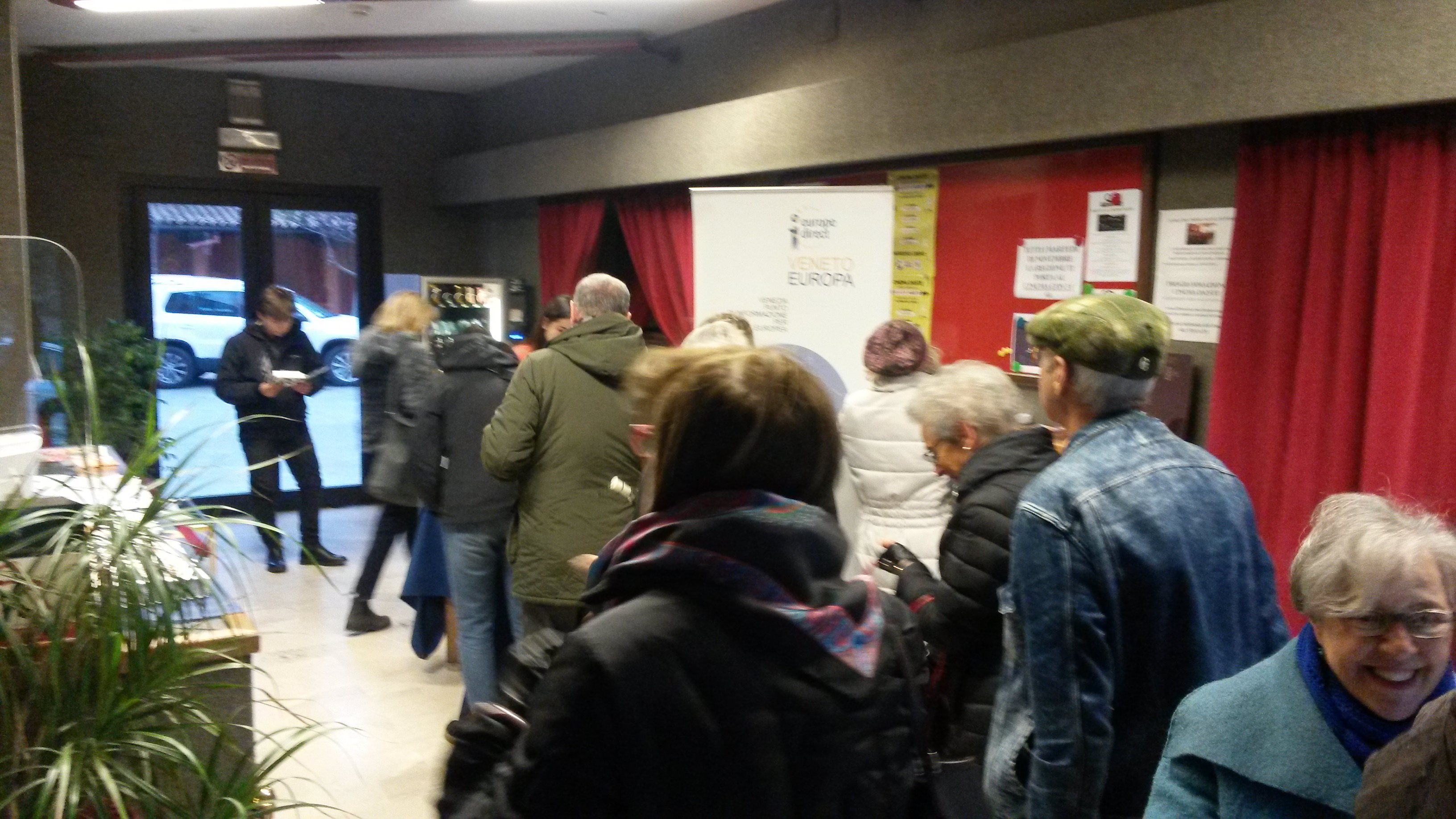