On the occasion of the 76 Venice International Film Festival in the section Side events in collaboration with the Venice Biennale and the Giornate degli Autori will be screened the films finalists of the LUX Prize 2019 of the European Parliament. The films to compete for the LUX Prize, now in its 13th edition, announced at the Authors' Day of 23 July 2019 in Rome are:

The three films and the topical themes that they address (-) once again display the creative diversity in European cinema. A wide range of film styles is visible in this selection, which includes a documentary (marking the third time in LUX FILM PRIZE history that a documentary has featured among the three finalists), a social drama with touches of comedy, and a political thriller. Thus, both genre and gender are well-placed in the selection, as the work of a female director is once again featured, in the shape of a film tackling the necessary and topical discussion about the presence of women in the social, political and religious spheres.

Here is a short presentation of the three finalists of #PremioLUX 2019 that will be subtitled in the 24 official EU languages and screened in all EU countries during the LUX Film Days in autumn:

- Cold Case Hammarskjöld di Mads Brügger
A provocative investigation into the 1961 death of Swedish UN Secretary-General Dag Hammarskjöld. A film that reminds us how feature filmmaking can be a consciousness-raising force and that, as a bonus, is also hilarious, charming and deeply humanist.

- God Exists, Her Name Is Petrunya di Teona Strugar Mitevska
A powerful cinematic work that tells the story of a woman who finds herself in a position that only men have access to at a religious ceremony, and which makes a significant contribution to the feminist struggle, the most acute social issue of our times, which has yet to gain momentum in the Balkans.

- The Realm di Rodrigo Sorogoyen
A forceful and adrenaline-charged thriller that grapples  with political corruption, through the demise of a successful politician and his fiefdom, which had looked destined to last forever.

These three films have already been in the spotlight at international film festivals. Cold Case Hammarskjöld world-premiered at Sundance, where it received the World Cinema Documentary Competition Directing Award, God Exists, Her Name Is Petrunya world-premiered in competition at the Berlinale, where it picked up the Ecumenical Jury Prize, and The Realm world-premiered in competition at San Sebastián, before going on to win seven Spanish Goyas.
The films in competition and the topics covered show once again the creative variety of European cinema. In this selection there is a wide range of film styles: a documentary (this is the third time in the history of the LUX Prize that a documentary is selected among the finalists), a social drama with hints of comedy, And one political thriller. Once again a woman’s work is presented, directing a film that opens up the debate - indispensable and current - on the presence of women in the social, political and religious spheres.

These are the ten films in the 2019 LUX FILM PRIZE Official Selection:

For the eighth year, these films will be the main core of the LUX Film Days in the autumn. Through this initiative, and in order to support the European film industry and help these significant European (co-)productions to circulate beyond their national market, the LUX FILM PRIZE subtitles the three competing films into the 24 official languages of the European Union and screens them in more than 50 cities and festivals across all 28 EU countries. In doing so, the European Parliament supports cultural diversity as it brings films to audiences across Europe and encourages debate on the issues they raise.

This year’s LUX Film Days will once again take advantage of the cooperation between the European Parliament Liaison Offices and the Creative Europe MEDIA Desks to strengthen visibility and increase accessibility. Three simultaneous screenings with webstreamed live debates with the directors will be organised in partnership with Creative Europe.

In autumn, the newly elected members of the European Parliament will be invited to vote for one of the three films in competition. The winner will be announced on 27 November at the formal sitting of the European Parliament in Strasbourg, in the presence of the directors. The winning title will be further adapted for those with visual and hearing impairments, and will also receive promotional support during its international release.

The logo, on which the actual trophy is modelled, is a spiral of film inspired by the Tower of Babel, understood in a positive sense as a symbol of the richness of diversity, the linguistic and cultural diversity of the European Union. 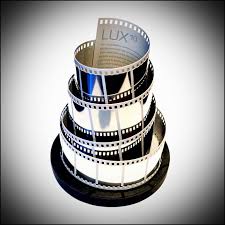 THE FORMER WINNERS OF THE LUX PRIZE: