Europe is not a distant thing! Instead, it is a reality in which we are all involved! It is up to us to seize the opportunities that the European Union offers us, with an active role ...indeed interactive!

Here are useful links to learn, debate and play with Europe:

UE in brief- effective website for information and essential news about the European Union.

Eu Tube - the YouTube space of the European Union. 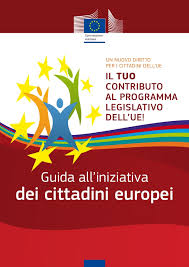 Contribute to law-making - form of direct participation in the European political process by participating in European consultations.

The European Commission may initiate public consultations prior to the definition and submission of a proposal for European legislation, known as the "pre-legislative phase". The purpose of the consultation is to involve those who will be the final recipients of the European standard in the relevant legislative and decision-making process (private citizens, bodies and NGOs).

Learning corner - the corner dedicated to teachers and children. Interactive website to learn by playing with interesting and stimulating teaching material about the European Union.

Zoe makes a splash!  - environment app that can be downloaded for free on Apple and Android devices. Interactive digital story for children aged 7 to 11 to discover the importance and value of water.